Does this sound familiar? It’s the end of yoga class . . . you’re lying face up on your sticky mat, the bell rings and you slowly make your way up to a seated position. You join your hands together in prayer, you bow your head down toward your heart, and whisper with reverence, the sacred word, Namaste. You feel connected to all of life and at peace. As you walk out to your car, that feeling of oneness and connection lingers and you feel a part of the sacredness of life. You feel like you are living Namaste. 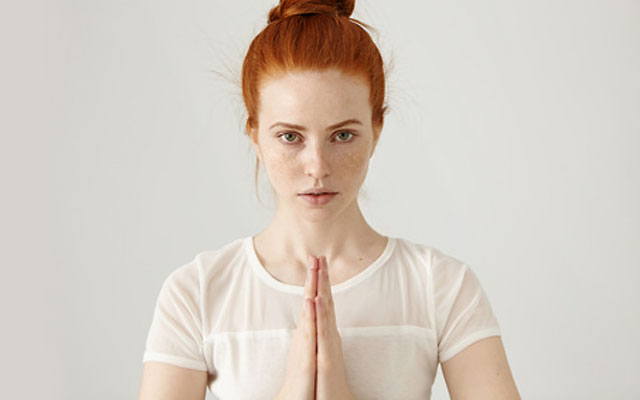 What does Namaste Mean?

How can we live Namaste in all our relations in life? What gets in the way of carrying that feeling of peace, connection and oneness out into our everyday relationships?

The 20th century mystic and philosopher, Martin Buber, talked about two different types of relationships we can have with each other and life. The first type, he called the “I-it” relation. An “I-it” relation is the “normal” way people relate to each other — seeing the other as a separate object – a means to an end – to get something from. The other type of relationship was what Buber called an “I-Thou” relationship. This is where the veils of separation are lifted and you really see the other person as they are — a real human being imbued with dignity and inherent value. It’s a way of perceiving the other where the separateness disappears — the light of your being sees and resonates with the light of their being– and there is a holy, sacred encounter and connection.

Why don’t we See Others through the “I-Thou” Lens?

Our human predicament right now, is that we are dominated by ego consciousness—a sense of being a separate self which is responsible for defending and controlling life so we stay safe. This means we are trapped in a perspective of living from a place of fragmentation and alienation. The ego is a small part of our wholeness. Asmita – the ego — is one of the obstacles that Patanjali talked about in the Yoga Sutras. Living from the small lens of the ego, we see other people as ‘objects’ rather than seeing them clearly as divine human beings.

Living from the small lens of the ego, we see other people as ‘objects’ rather than seeing them clearly as divine human beings.

A.H. Almaas, one of the great spiritual teachers of our time, talks about three main object relations – filters that get in the way of seeing clearly, and cause us to see others as an “it” rather than a “Thou.” These filters are products of the defensive conditioning of our ego structure. Yoga is a systematic approach for waking up out of the trance of separate ego consciousness and reconnecting to the seamless expanse of our True Nature as fundamental Consciousness – infinite, timeless, and already complete.

“Object relations” are like ego based veils that get in the way of seeing the other clearly. The first type of object relation is “rejection.” It happens when we habitually have a habit of responding to life by rejecting others, or feeling rejected ourselves. When running this program, we feel left out, alienated, unwanted, alone, and tend to retreat from others and life. In the Yoga Sutras Patanjai called it dvesha. It’s a veil of pushing away, denying, avoiding, rejecting – a type of protective mechanism that prevents any “real contact” from happening. It keeps one feeling alone, afraid, separate, unwanted, excluded, and small, which makes it difficult for you to open into your full maturity as a human being.

The second type of object relation is “frustration.” The habitual response of frustration is born from the ego wanting something you can’t have much like little kids constantly begging their father for a candy bar even after he said, “no.” This can lead to anger, aggression, attack, which ultimately creates more distance. It can also lead to wanting to quit, give up, and leave a relationship, project, or even life itself.

The third type of object relation is “attachment” and it keeps you gripping, clawing, grasping after something you have or want. It often comes with a desire to keep what brings you pleasure, and not lose it. It is the root of all addictions — what Patanjali called raga in the Yoga Sutras. When you see another person through this filter, you fail to see the whole person, instead you see them in a limited way — a means to an end – for your own self-gratification. It creates relationships based on use rather than ones that recognize and honor the authenticity, wholeness and fullness of the other.

How do we break Free?

It’s helpful to see which of the three object relations you tend habitually act out in life. Once you see it clearly – and shine the light of your awareness on it — It’s harder to continue to unconsciously hide behind that veil. It loses some of its power. Getting curious about what’s really going on in your relationships can be a gateway into breaking this spell of separation and seeing the other clearly for who they are.

Getting curious about what’s really going on in your relationships can be a gateway into breaking this spell of separation and seeing the other clearly for who they are.

There’s also a way in which we can practice cultivating an “I-Thou” relationship, by setting the intention to make real intimate connection with others. We can relax our defenses, really listen to other people, and soften our eyes, so we can see more deeply who they really are. Sometimes this new perspective of “I-Thou” happens spontaneously. The veil is suddenly lifted and we can see clearly, as if for the first time, the sacredness of all that is.

A good example of that happened during a powerful scene in the movie Avatar. Neytiri, the main character of the earth-based culture, rescues the main character from the capitalistic culture, Jake. She finally sees his human identity – which had been hidden behind a more mythic, strong, image with a body that would fit into her world. Now, she sees him frail, crawling on the ground, gasping for air. She gives him the oxygen mask and he takes a breath, he comes back to life. He looks up into her big yellow eyes and says, “I see you.” She looks back into his eyes, and says, “I see you.”

There was such vulnerability in this deep level of intimacy. No longer hiding behind the comforts of masks of separation and objectification. This was something so much more honest, real, dangerous and so beautiful. On some level as human beings we are longing for this deep type of real connection and contact — to really see others, and be seen, as who we really are. Yet we habitually hide, retreat, and act from behind the veils of defensiveness.

Yoga invites us to live this level of the “I-Thou” relationship. To whisper, “I see you” to the people we come in contact with. To pause and really see and feel each other. To be that close, vulnerable and authentic. To make real contact. To unveil the divine right here on earth in the eyes and hearts of the other. This is what it’s like to live Namaste out into life, to embody it, and to become it.