Indian artists made careful choices about how to position Indian gods and goddesses in painting and sculpture. They meditated to find what deities looked like,1 and found familiar bodily positions in their visions. These body positions became stock “power poses,” and were called pratimas in the tradition.

Because stories of gods and goddesses are meant to guide our growth and transformation, anger and aggressive activity suggests the inner ferocity needed to destroy our false understanding of the world. Though many gods are found in these positions of aggression, it is Shiva, the lord of the yogis, who is probably the best-known symbol of the fierce work of self-transformation called sadhana—and who is pictured in a ferocious attitude. Indian gods take the form of all kinds of personalities besides their main one (Vishnu is also Krishna, for example), and we see Shiva as the fierce warrior named Virabhadra (for whom the pose is named) in figure 1. 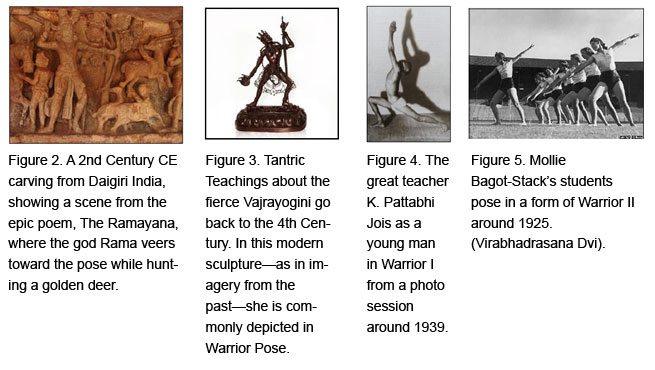 This pose is seen on coins dated to 100 BCE, and it is still used in sculpture, pottery and paintings today.

Though it boasts a 2000-year pedigree, our “Warrior Pose” isn’t linked to yoga until modern times.

In mid-1920s London, Mollie Bagot-Stack used asanas she had learned in India to create a vinyasa-type movement style she called “Stretch and Swing” (avoiding the term “yoga”).2 Among other poses in her vocabulary, her 1931 book shows Warrior II (fig. 5).3

Nearly a decade later, some pictures were taken of Krishnamacharya’s great student Krishna Pattabhi Jois in the pose (Fig. 4). This is the first time we see a picture of the position where it is called a yoga pose,4 despite its long history!

We meet the character the pose is named for in a violent story about Shiva and his wife, Parvati (shown in Figure 8).

Shiva, went crazy with grief and anger when he heard Parvati, had burned herself alive to protest her father, Daksha’s, failure to invite Shiva to a big ritual he was hosting in the Himalaya mountains.
Shiva yanked out a lock of his hair and flung it down, and it shot back up to become an embodied form of himself called Virabhadra (“Radiant Hero”). Virabhadra instantly gathered Shiva’s dark tribe of demigods (called Ganas) to behead Daksha and wipe out his ritual party.5

Many people know this name “Gana” from the longer name, “Ganapati,”—a sobriquet for Shiva’s elephant-headed son we also call Ganesha. Both Ganesha and Ganapati mean “lord” (pati, isha) of the Ganas.6

Warrior I’s vertical arms show Virabhadra shooting up from the ground (figure 1); Warrior II’s one hand forward and one hand back symbolize him aiming a sword (figure 5); and Warrior III’s balancing on one foot, hands forward (figure 6), depicts Virabhadra placing Daksha’s chopped-off head on a stake!7

How to do it

This is a beginner-level pose where the arms and torso are held several ways—as seen in the pictures. In non-balancing forms (Warrior I and II), proper alignment spreads the front toes, puts the bent knee right over the ankle and makes the front thigh parallel with the floor. The straightened back leg is grounded through the outer edge of the forward-angled foot, and the inner ankle there is lengthened while the inner back thigh pulls isometrically away from the floor. The tailbone drives down as the chest lifts and spreads. We also restrain our ribs from bowing forward as the spine takes a shallow curve.

Warrior Pose makes use of penetrating (vigaha) gestures through all the limbs (head, knee, heel, tailbone and fingertips). It usually shows up early in a practice sequence, especially in vinyasa-style yogas that use Sun Salutation as their warm-up. That said, the fact that the front leg rotates outward in Warrior II provokes some systems to offer more preparation, and so it is offered later in a class sequence.