Rarely was a woman more tragic, more beautiful, or more compelling to our collective consciousness.

Born Norma Jean Mortenson (1926 – 1962), Marilyn got her name from the suggestion of the 20th Century Fox executive, Ben Lyon.

He said the anonym was “sexy” and the “double-M” was lucky.

Though we usually foreground the tragic side of her life, it isn’t widely acknowledged that this shape-changer named Marilyn was ambitious, skilled in her craft, and extremely focused on reaching her goals.

As with many visionary people today (and you might be one of them), yoga formed an integral part of her wild success.

In 1956, Marilyn told reporters that yoga had become a permanent part of her workout regimen.1 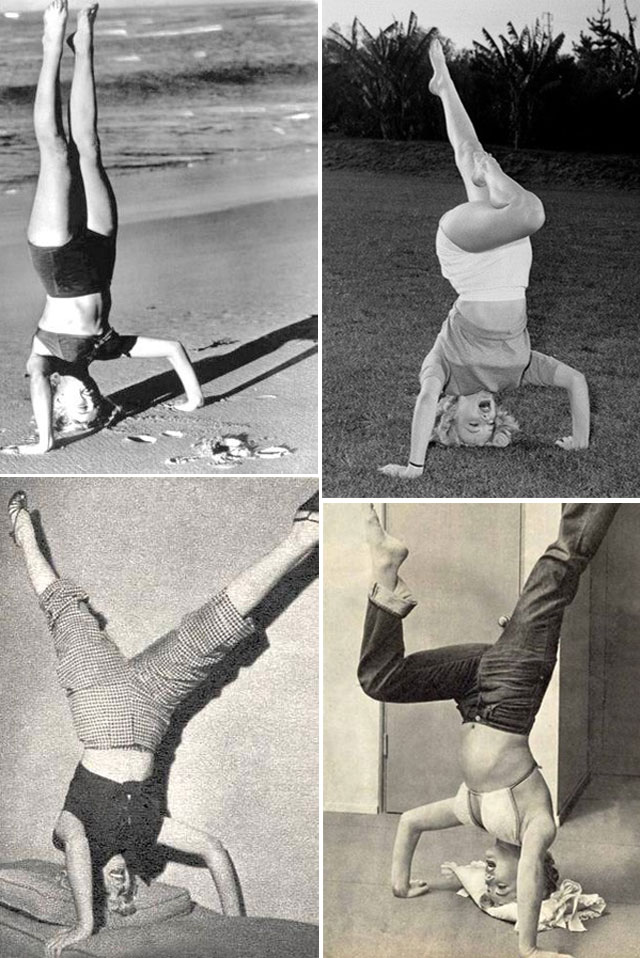 And in the pictures here, the effect of that routine shows itself not only in the shapes of her posework, but in her shining self-presentation to photographers.

Not all of these images reveal yoga’s forms in the starkly descriptive way we have come to think of them since the the alignment work of BKS Iyengar grabbed our imagination with his 1966 publication of Light on Yoga, but where thes pictures don’t display clear asanas, they show clear approximations.

As Picasso said, “We all know that Art is not truth. Art is a lie that makes us realize truth.”

Yoga probably salved Marilyn’s soul and empowered her unrelenting efforts toward artistic success, but by refining her beauty, it also propelled a historically-resonant achievement in the realm of personal artifice.

“Marilyn Monroe” was a carefully crafted look and persona.

The great cockscomb, Oscar Wilde had nothing on Norma Jean.

She developed her radiance through physical workouts that were intense—in one picture below we see her doing yoga with weights (some 50 years before Sherri Baptiste wrote a book on the topic).


Marilyn studied art appreciation at UCLA in 19512 and had personal fashion designers. Her nose, jaw, lips and teeth were surgically altered.  She was a natural brunette, but dyed her hair blond.  She reshaped her ribs.

She had a “look” that was formulated partly through her collaboration with her PR advisor,

Whitey Snyder. Monroe biographer, Sarah Churchwell writes that, after much experimentation while preparing for the film Niagara in 1953, he and Monroe settled on, “The Look, and we used that Look for several pictures in a row . . . the “look” was established.”3 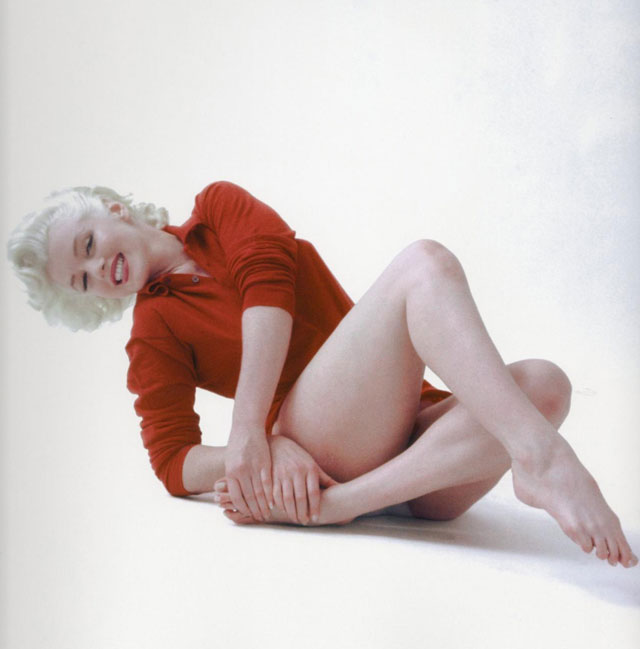 The first evidence we have of her practicing yoga is near the time of her first acting contract in 1946.

The stark black-and-white pictures of her in a white outfit below hail from a set of promotional photos mailed to movie agencies in 1948.

Devi landed in Hollywood in 1947 after a trip to Shanghai to resolve the affairs of her recently-deceased husband. Previous to 1946, Devi had taught yoga in India–where she also wrote her first book.

As shown in Michelle Goldberg’s fine new biography of Devi, The Goddess Pose, Indra was a helluva shapeshifter herself. Though no Marilyn, she gave America some slice of what it wanted, attaining fame as a glamorous yoga teacher with Olivia de Haviland, Ruth St. Denis, Greta Garbo and other famous players in LA’s movie-making society as devotees.

It is often said that Devi taught Marilyn yoga too, but the aforementioned promo pics show that Monroe knew yoga before Devi’s U.S. landfall, and there is no concrete evidence of a connection—even though Indra and Marilyn were among the few people in the country actually practicing yoga in their day.

It included a list of her star yoga clients. Monroe–at the height of her fame–is absent from that tally.

Recently, a 1960 photo surfaced that seem to show Indra teaching Marilyn (immediately below), but the beauty in question is the brilliant Eva Gabor–half of the knockout movie-star combo that included Eva’s sister, Zsa Zsa (who just died this December 18th). 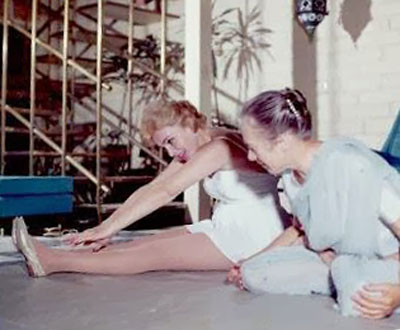 Like the Gabor, Marilyn was masterful orchestrator of the exterior gaze.

Her private life seethed with tragedy, but she positioned herself for the public without a misstep.

Transcending the pain in her life, her constant declination showed the awareness and poise that yoga can create for our public as well as our private lives.

These pictures provide some evidence that Marylin’s achievement of a historically-resonant career can be credited to the formerly unique—but now universal—practice of yoga posture. 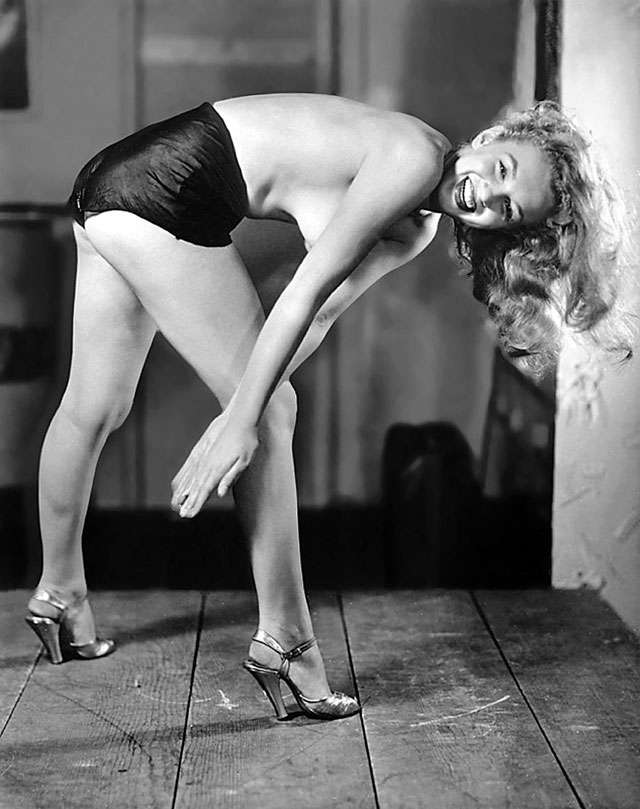 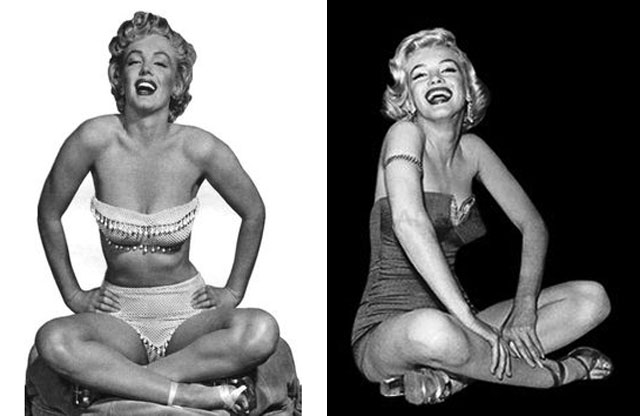 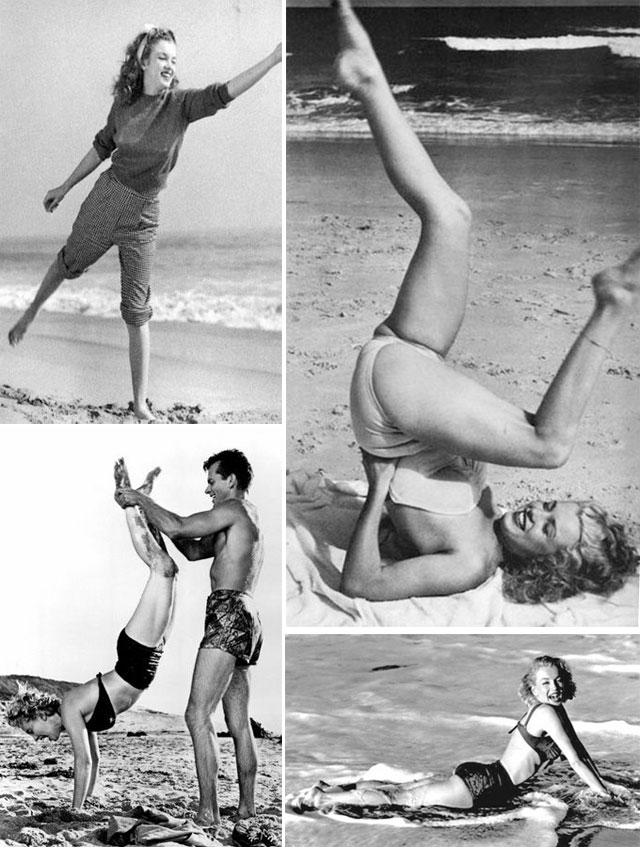 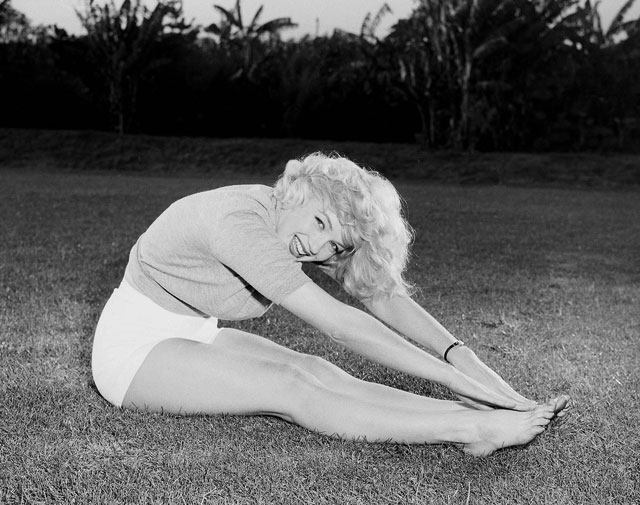 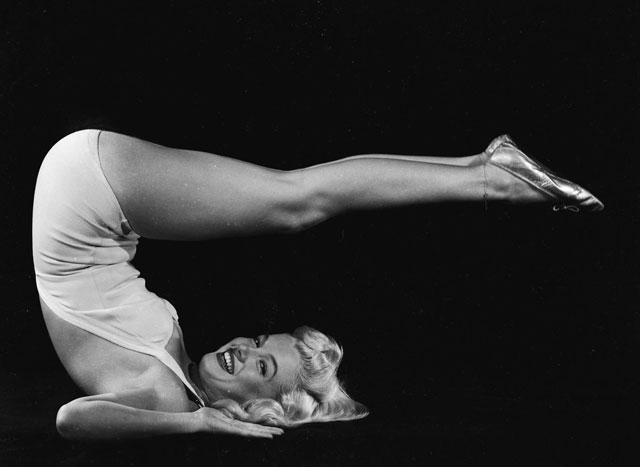 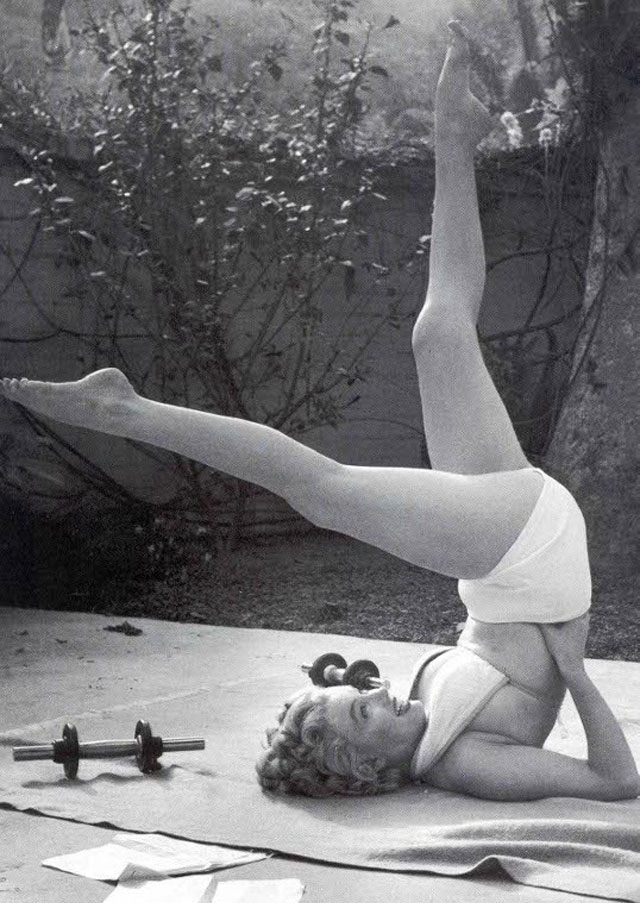 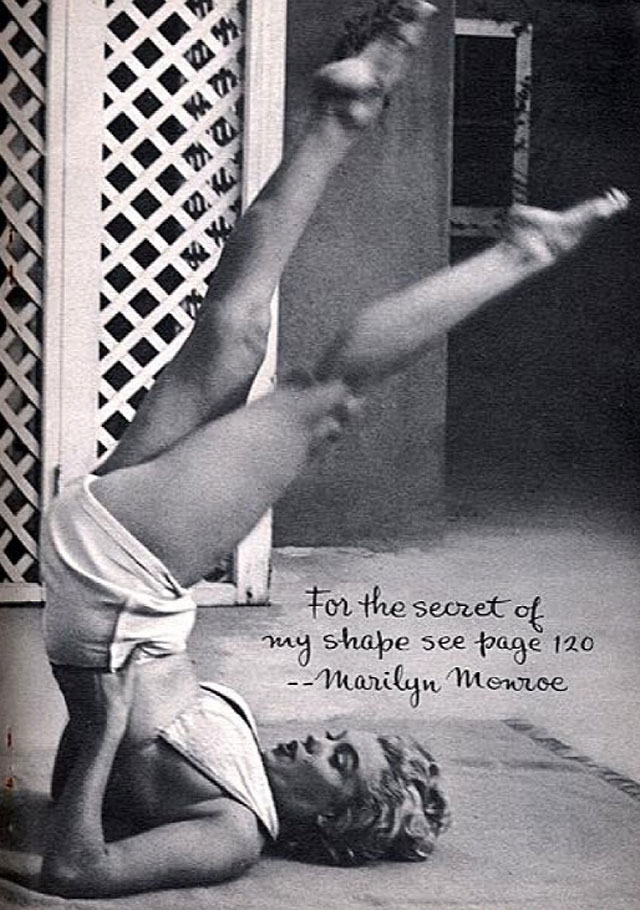 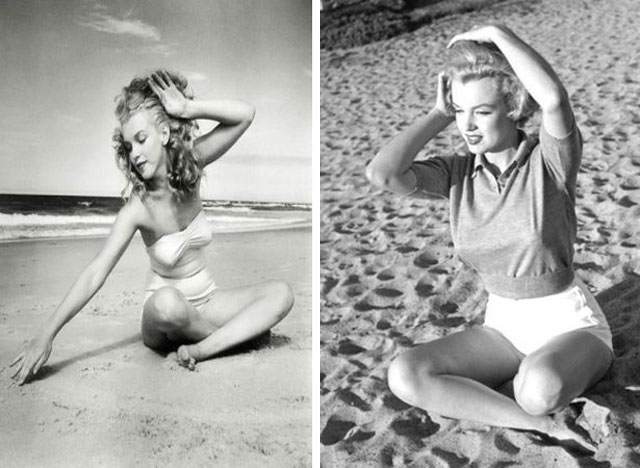 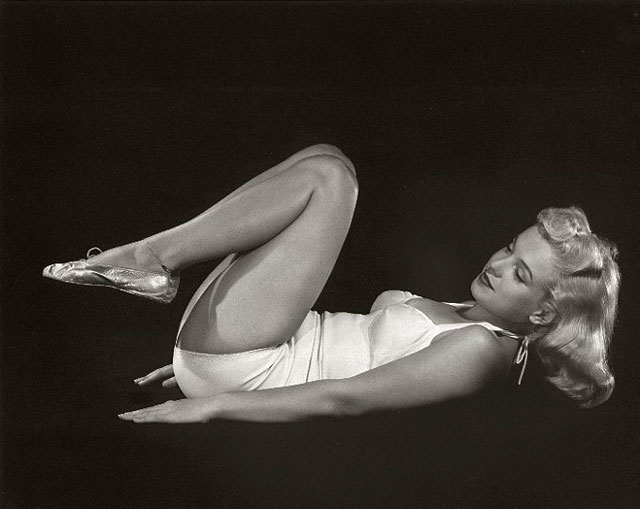 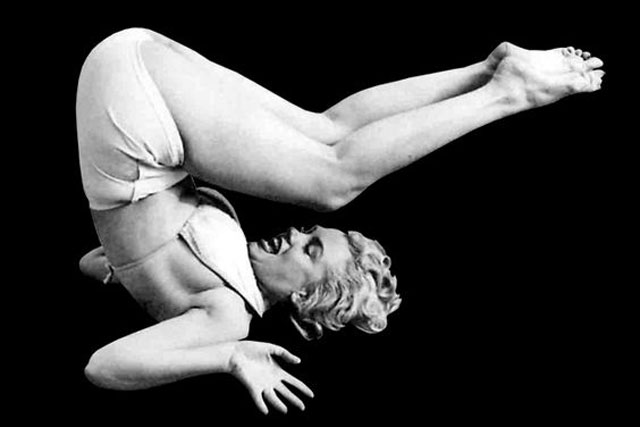 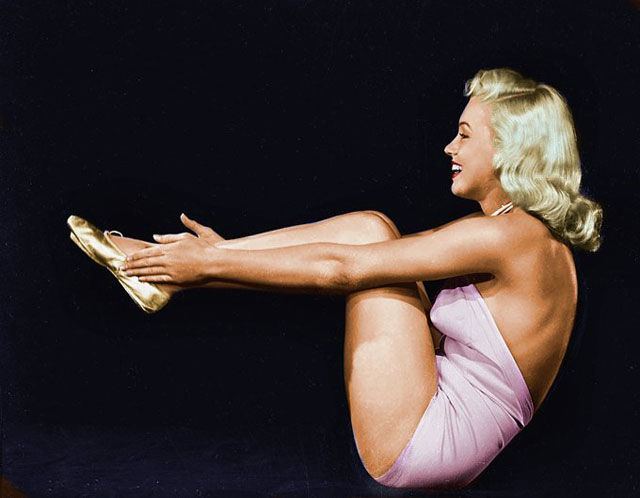 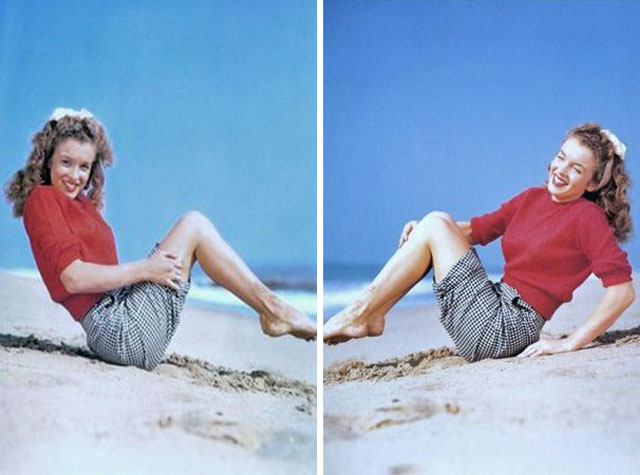 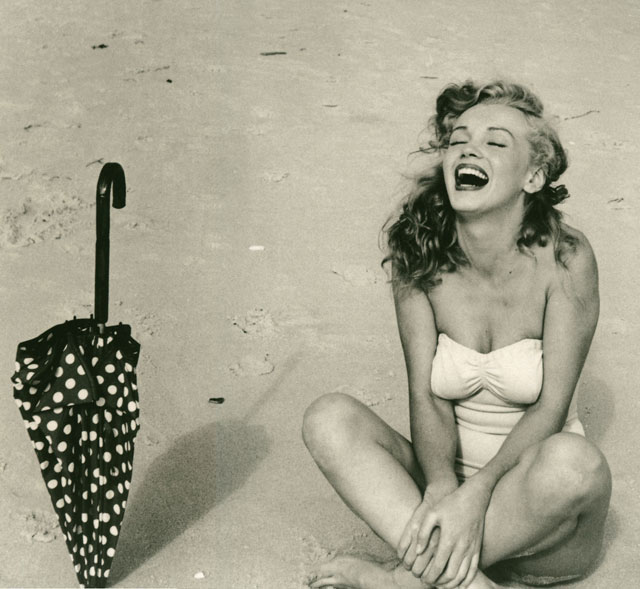 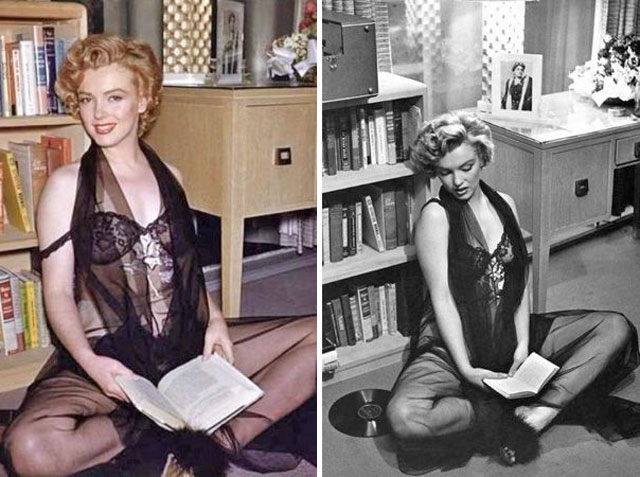 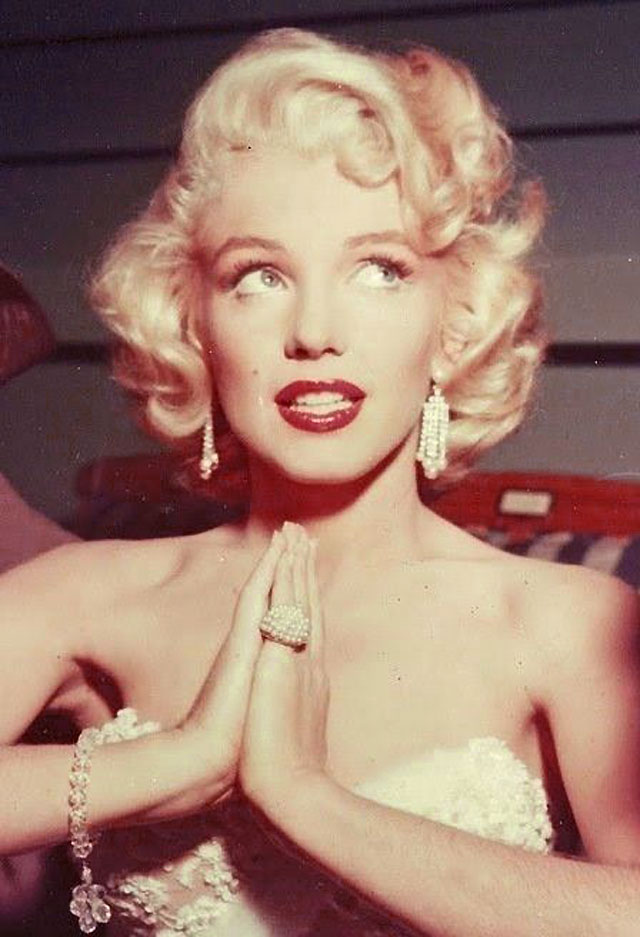