Skip to content
May 10, 2016August 24, 2017 Oleg Kuzmint
This yoga style originated from the Astanga Vinyasa school, adopting the concept of asanas’ smooth dynamic connection in a sequence. The best example of such a sequence is Surya Namaskara (Sun Salutation), which often occurs at the beginning of the lesson. However, Vinyasa Flow is far from the severity of Astanga, where certain asanas are performed in the same order during each session. Vinyasa Flow classes are different, depending on the yoga studio, class, and instructor. Students are also given much more creative freedom.

The Vinyasa Flow style is popular due to its dynamics, fluidity, diversity, and freedom.

The style’s disadvantages include the lack of alignment and unstable concentration in asanas.

The word ‘vinyasa’ has several meanings, as is often the case in Sanskrit. Vinyasa is a flow from posture to posture, a sequence of postures, and the synchronisation of movement with breathing. As for breathing, of course, it is bound to play a major role in dynamic practice. The right combination of breathing, asanas, and vinyasas ensures this ‘flowability’. 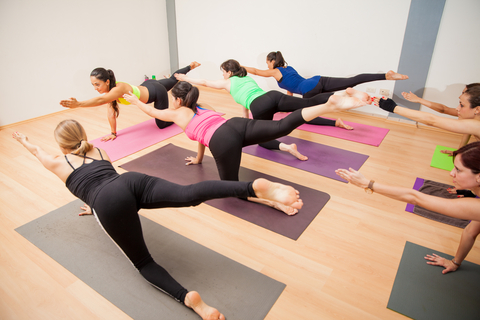 Be prepared for the fact that you will be too busy to think about something extraneous. Alignment in asanas, transitions between them (vinyasas), and their synchronisation with breathing – all of this will completely occupy your attention. You will be well-focused in practice and close to achieving awareness. The result is the calming of the mind, which is known to be one of the main yoga objectives. That is why the Vinyasa Flow style is sometimes called ‘dynamic meditation’.